When MiC+ is plugged in and being used by an application as the microphone, the soft-key above the dial cycles through the 5 different monitoring blends.

When the left-most LED is illuminated white, this indicates full “direct’ monitoring signal. You’ll only hear what the microphone is picking up. No playback will be heard:

Continuing to press the soft-key again will cycle through the other four levels of blend. When the center LED is illuminated, you get a 50/50 equal blend of direct-monitor from the MiC+ signal, and playback:

Unless calls are more important than creativity? It is recommended that in the iPhone> Settings Do Not Disturb is turned On. This will prevent a call from interrupting that perfect take or inspired performance.

At the very top of the included MiC tripod, you will find a small threaded shaft. Screw this threaded shaft into the threaded hole in the back of the MiC. Use the small tab on the tripod to tighten and position MiC in the direction of choice.

To set up MiC to work with GarageBand on the Mac do the following:

1) Connect MiC to your Mac using the included USB cable. 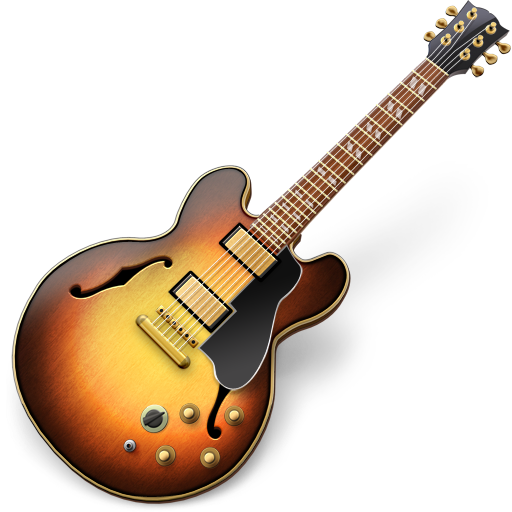 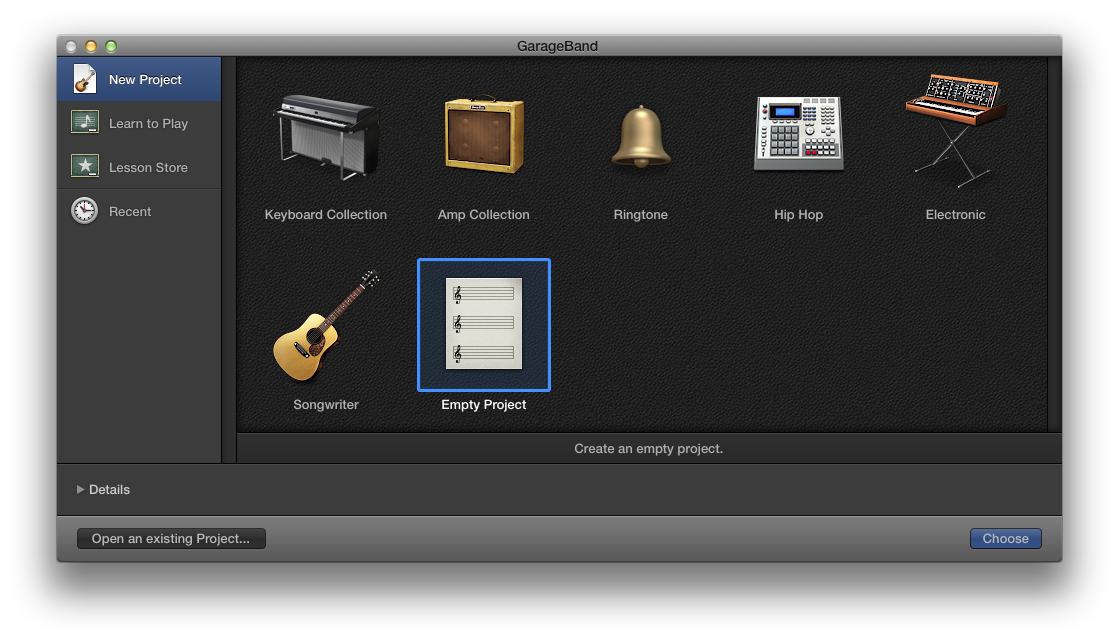 4) Upon creation of the project, the new track menu will automatically launch. Please ensure that select Microphone to open a Microphone track. Set the input as MiC/MiC 96k and the output as the Built-in output. Hit the Create button to create the track in GarageBand. 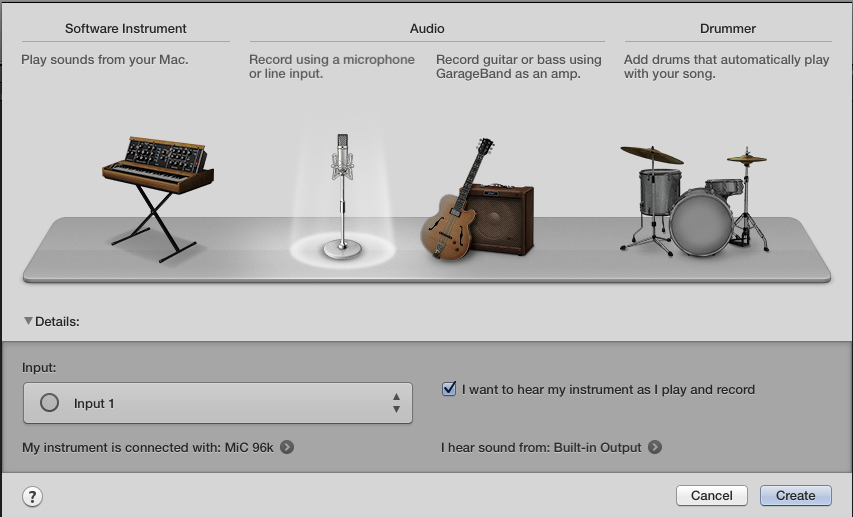 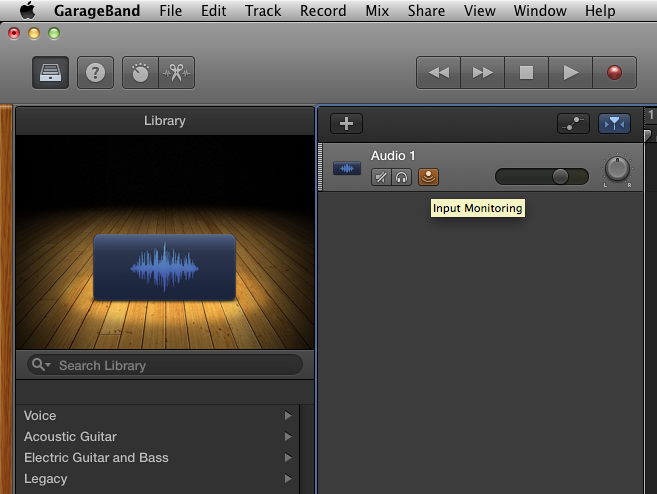 Now you are ready to record using MiC!

If you can’t hear your input signal when using the Garageband app on your iPad, iPhone, or iPod Touch, then you will need to enable the Monitor feature of the app. This feature is located in the Input Settings menu as shown in this video:

This setting is especially important for guitar players as using Garageband’s Monitor feature enables you to hear the guitar effects built into the program. Because of this fact, this method is much preferred over utilizing the hardware monitoring feature of the Maestro app.

For more information on Apogee audio interfaces for iPad/iPhone and tutorials, check out our video page at www.apogeedigital.com/videos

The following troubleshooting topics are presented to resolve issues when using Apogeeʼs MiC with Apple iOS devices and Macintosh computers.

No audio input with GarageBand and MiC

Symptoms – If you are using iOS 4 and connect an Apogee MiC, GarageBand may display a message to connect a microphone or other input device. If you press record, you may see a message that the device does not have an audio input and that you cannot record. Resolution – This issue is resolved in iOS 5 – see Apple support article here – http:// support.apple.com/kb/TS4129.

On iOS devices updated to iOS 5, MiC may not be initialized after starting the iOS device from a powered-down state. In this case, MiCʼs LED indicator is not illuminated blue (as should be the case). Simply disconnect then re-connect MiC, or connect MiC after the iOS device has completed its start- up sequence.

After sleeping then waking an iOS device while GarageBand is open, audio may become distorted

Symptoms – After an iOS device goes through a Sleep/Wake cycle, audio may become distorted. Resolution – Quit all audio apps (see clicks and pops below) and re-launch GarageBand

No input after connecting Apple headphones with mic

Symptoms – After connecting Apple iPhone headphones, or other headphone equipped with a built-in mic, audio apps donʼt accept input from MiC. Resolution – iOS devices accept audio input from the most recently connected peripheral, in this case the built-in mic. To re-establish input from MiC, disconnect and re-connect MiC.

Clicks and Pops on iOS devices

GarageBand 1.01 and higher offers the capability to output to external output devices equipped, including Airplay, Bluetooth and HDMI-equipped media devices. When using any of these devices there is no support of audio input, including MiC. See the Apple Support article which describes this functionality here: http://support.apple.com/kb/HT4622.

Weʼve measured latency from MiC through GarageBand iPad to iPad headphone output to be 23ms. We havenʼt found instances of latency inconsistency, though there are reports from the field indicating that latency can increase.

Symptoms – After the Mac goes through a Sleep/Wake cycle, latency through MiC is excessively long. Resolution – This is fixed in OS X 10.7

Clicks and Pops on the Mac

Tip – When experiencing clicks and pops on a Mac, try raising the buffer size in the audio app. In Logic, for example, choose Logic Pro > Preferences > Audio, click the Devices tab, then the Core Audio tab, and set the I/O Buffer Size to the next highest number.

Because MiC does not have an audio output it must be included in an aggregate device that combines multiple sources to create one audio device.

To set up MiC to work with Pro Tools do the following:

1) Connect MiC to your Mac using the included USB cable.

2) Open Audio MIDI Setup located in the Utilities folder on your Mac.

3) Select the Pro Tools Aggregate I/O device on the left side of the screen.

4) Click the check box next to MiC on the right hand screen to add MiC to the aggregate device.

6) Select Pro Tool Aggregate I/O in the “Current Engine” drop-down menu at the top of the page.  Set the H/W Buffer Size to 64 Samples and click OK.

10) Assign MiC as the input for your desired audio track.

Now you are ready to record using MiC!

For Logic 9 and lower:

With your Apogee devive selected as the input/output in Logic’s Audio Preferences, go to the “Options” menu and select “Audio” and then “I/O Labels”. Now you can select the custom Apogee labels for your device.

For Logic X and higher: